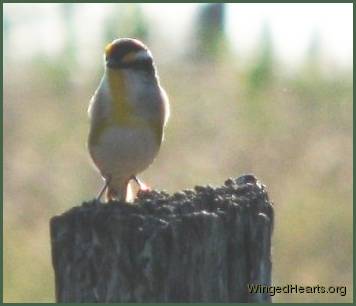 This bird is a special friend.  From tip of the beak to the end of the tail the bird is no more than 11 cms long.  Don't let this picture fool you, it has been magnified heaps.

Ron first noticed these tiny birds when they called out to him from the tree behind our house.  They would sing out merrily every time they saw him near the back gate.  We tried to encourage them to visit more often, but the birds were not interested in anything we had to offer.  They just wanted to tell us that they too were our friends.

Then a few weeks later a most remarkable incident took place.  Ron was levelling a big ditch for a water tank.  The hole was few metres deep and Ron was busy shovelling the extra earth over the edge, working as fast as he could.  This bird flew over and sat right at the corner of the ditch, close to where the soil was landing and sang to Ron, completely unperturbed by Ron's movement or the soil flying in his direction.  He sang sweetly and determinedly.  He wanted to say something and was quite certain that he was in the company of a friend.  When I went out to see if Ron wanted a drink and saw the bird, I ran back in to get the video.  The bird continued to sing to both of us, while I handed Ron the video-cam and he shot some film from the ditch (using the analog video camera).  I decided to get the camera as well, and when I returned the bird decided to sit on the post. The sun was behind him and the first couple of shots did not focus too well.  One of the noisy-miners, seeing the camera wanted to pose as well, and I only managed to get one reasonable shot before the litlle bird returned to the tree and disappeared amongst the leaves.  I was quite annoyed with Minnie as the bird would have stayed longer.  All in all the bird must have spent at least half an hour with Ron, singing for most of that time.

There was no doubt in our minds that the bird wanted to use the opportunity to introduce himself and show us that they had noticed our friendship with the bigger birds.  They too wanted to be friends, even though they didn't eat in our yard or visit often.  Their size or distance did not mean that they were not observant or interested or indifferent to the relationship between the birds and us that had been developing in front of them. We got his message, their species might be small, too small to be seen from the distance, but they were very aware and conscious of the going-ons and wanted us to know that they knew and cared.

We looked at the full photo and thought the bird was a scrubwren and all these years that's what I'd been calling them.  The bird is so small in the standard size photo that it could not be put up usefully.  So, I cropped and magnified it.  In order to compenesate for the shadow, I increased the brightness.  At the start of writing this story, I decided to go back to the bird book and recheck the fine details. Brightening the picture had now highlighted the yellow streaks and I quickly realised that the bird did not quite resemble a scrubwren. A few flicks of the pages and it clearly matches a Striated (Black-headed) Pardalote.

I broke the news to Ron when he got home and he instantly replied, that this is the species that builds its nest under the nest of a magpie (according to Prof Gisela Kaplan's book on Australian Magpies, p50). The bird's desire to connect with us made complete sense once we realised this.

Pardalotes have a partnership with the magpies, in many parts of the country.  The Magpies build their nest a little deeper, giving these birds room to have their nest inside one of the hollows of the bigger twigs that form the magpie nest.  The magpies don't mind the birds going in and out, looking after their chicks.  These chicks would be no bigger than the worms and bugs that the magpies eat for food, but they are safe from their predators, while they are close to the magpies.

Being such close friends of the magpies, they felt it was appropriate to introduce themselves to the magpies' human friends. The assuredness, determination and confidence with which this little bird had left the shelter of the trees, as well as the safety of his flock and single-mindedly demonstrated his desire to communicate, his sense of identity and passion to contribute, is an action that is born out of love and an innate sense of knowing. We are so grateful for his gift.

(click on the 'next' button to forward through the slides).
A special Friend 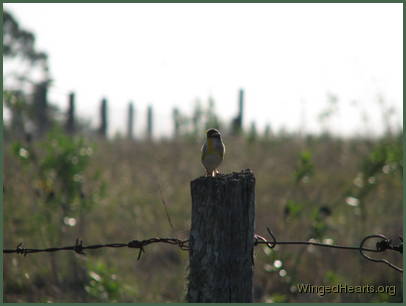 Stay tuned by subscribing to the Wild Bird Talking Newlsetter and the WingedHearts Blog.

Stories about:
human-bird friendships
bird behaviour
Bookmark/Search this post with

‹ Scaly-breasted Lorikeets up The Mid-afternoon Thornbill Catches the Grub ›